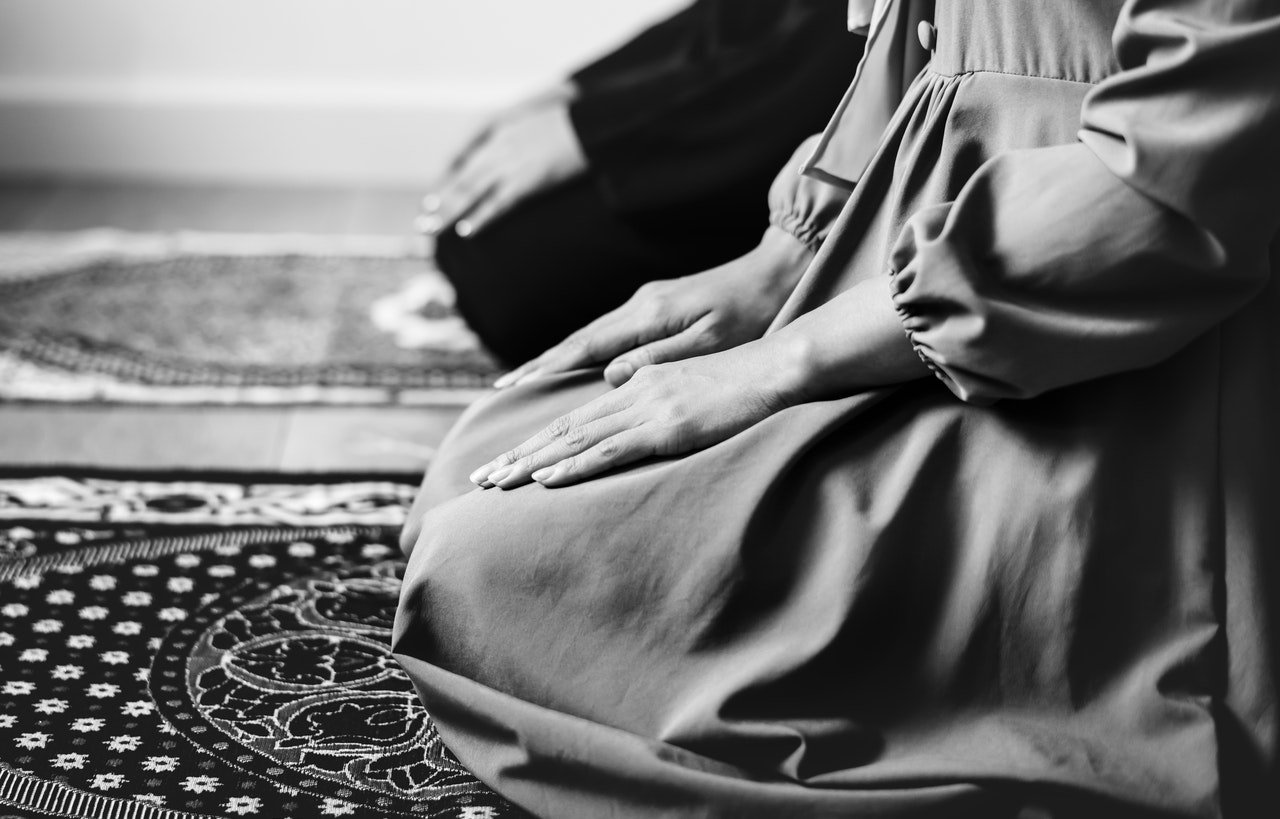 When the athan goes off on her phone, it’s habit and harsh berating from her mother that forces Yara to not mute it. It’s been a few months since she has last prayed, and sometimes she finds herself missing it; -the solace, the ability to forget about the world for a few moments and talk to God. But she can’t bring herself to make wudu. Can’t pretend to be clean or holy. She can’t bring herself in front of God after what she’s done.

She’s broken her mother’s heart. Yara knows this and it hurts too much to face her so she spends her time in her bedroom or at school.

The Quran still sits by her bedside, dusty and unopened. She still wears her hijab everyday, but even that has gotten harder. The fabric feels heavy on her head, suffocating in a way it never was before. She feels like an imposter every morning. It gets worse when everyone else sees her as an imposter too.

Her aunt told her that with the way she was dressing, it wasn’t really hijab. Her shirts should be longer, pants looser, hijab tighter to cover those strands of hair that always sneak through. You might as well take it off.

It was stubbornness and a need to prove everyone wrong that made her keep it on.

She doesn’t linger in the student lounge anymore, or go to MSA meetings. After class, Yara runs to the library with her headphones in and her head down. Socializing has become exhausting, and these days, pretending to smile makes her face hurt more than it used to.

But one day her studying is interrupted by a gentle nudge to her shoulder. Yara pulls one earbud out and looks up to see Selwa standing in front of her. At one point, Selwa was Yara’s closest friend. They would rant about professors, pray, attend Halaqas at the local mosque together, and bring each other coffee. But Yara didn’t want Selwa to know about what was happening with her, she worried she would see her differently, so she pulled away. Slowly, she stopped answering calls and texts and made up excuses about why she couldn’t meet with her. Soon, Selwa was like any passing face in the halls to Yara. Except as Yara looked up at her now, a warm smile with two styrofoam coffee cups in hand, she realized things weren’t ever that black and white.

“Hey,” she said, setting down one of the cups.

“Hey,” Yara says, and it’s weird, awkward in a way their interactions have never been.

“Is this seat taken?”

Selwa places her belongings down in the seat right in front of Yara. “I brought this for you. Vanilla latte with skim milk and two shots of espresso.”

“Thanks,” Yara says, and takes a sip. Selwa puts her headphones in and starts taking out her books. She does her homework and pretends like everything is normal. Like Yara didn’t just cut her off, ignore and avoid her for two months, and she feels the same guilt she does when her mom calls her down for dinner. She swallows it down with the coffee and finishes her homework.

This happens a few more times, Selwa seems to have realized that Yara seldom changes her studying spots, brings her coffee, and studies with her. Yara feels comforted by her presence.

One day, she stands in front of Yara without anything in her hands and says, “Get up, we’re leaving.”

Yara opens her mouth to protest, sees the resolute set of Selwa’s features, and remembers how stubborn she could be. She packs her books and follows her out of the library.

“Where are we going?”

“Somewhere,” and that was the end of that. They ended up making a pit stop to the cafe before going to Selwa’s car, and with coffee in both of their hands, they left campus.

It didn’t take long for Yara to realize they were going to the park on the other side of town. The park was on a steep incline and overlooked the city. It was also almost always empty during this time of day which meant Selwa wanted to talk. And actually talk this time, not small discussions about how cold the library was and an offhand comment musing about the likelihood of getting hypothermia.

Selwa parks her car at the highest point, and they walk outside and sit on the ledge they’ve sat on time and time before, except this time it’s so heavy and strange and constricting that Yara loosens her scarf. They sit quietly for a while before Selwa takes a deep breath and starts talking. Yara could see she was nervous. She was certain the words she would hear have been practiced.

“I noticed something was going on with you and you pushed me away. You didn’t want me to know and I didn’t want to push again, but I missed you, and knew you weren’t okay and I… I can’t just leave you, and you,” and there’s a tightness to her voice, like she’s trying to keep herself calm and steady, trying not to scare Yara away, “you can’t just leave me and push me out like this. I just want to make sure things are alright with you. So I’m going to ask you this once… as your best friend and someone who cares about you…. What’s going on Yara?”

So she tells her everything. Starts at the beginning and cries and shares things she’s never shared before and Selwa just holds her tight and tells her not to worry.

“Yara, it will be okay, because you have Allah and as long as you have faith, wallahi everything will be okay. Inna ma al isree yusra, Yara. With hardship comes ease. That’s Allah’s promise to us. It will be okay.”

“Selwa, I haven’t prayed. It’s been months. I can’t. Not after what I’ve done.” And it’s true. It’s not that Yara doesn’t want to pray, it’s that she physically can’t bring herself to do it.

“You have to try, Yara. Allah doesn’t expect perfection from us. You have to try because it’s for you. And you have to forgive yourself. You can’t carry this on your back, you can’t keep punishing yourself and isolating yourself. It’s hurting you and the people you love and you know that’s not what you want.”

And Selwa was right, because the last thing Yara wanted was to hurt more people. She talks to Selwa and promises her to try. She promises her that she’ll talk to Allah and seek forgiveness.

And that night, the athan for Maghrib goes off and Yara is convinced she is going to pray. Because doubting Allah’s forgiveness would be doubting His mercy. Because the battle was really with herself, her guilt and anger and regret, but never with God. He has been there, calling for her, sending her signs and road maps and all she had to do was forgive herself.

Because God’s forgiveness is a given to those who seek it.

She puts her head down in sujood for the first time in months and a dam breaks lose. She sits on her knees and prays and cries and repents. She doesn’t know how long she stays on the prayer mat, but she remembers the door behind her creaking open before shutting quickly. She doesn’t turn around. She wishes it were possible to bow her head lower into the mat.

A while later, the door creaks open again, and this time her mother comes in with a cup of tea and homemade sweets.

She sets in on her desk and comes behind Yara and gives her a kiss on her forehead in the way she hasn’t done since Yara was a child. Yara turns around, wraps her arms around her in a hug, and holds on and suddenly, the world isn’t collapsing on her, she isn’t drowning or sinking or lost. Suddenly, she can breathe.

Reem Farhat is a 19-year–old first-generation Palestinian American writer and poet. She is currently a sophomore at Fordham University, where she is studying International Studies and Journalism.

Reem is an aspiring journalist who hopes to use her voice to elevate and empower the voices of Palestinians all over the world. She is the Editor-in-Chief of Falastin, a Palestinian American Literary magazine aimed at reclaiming the Palestinian narrative and engaging in resistance through art. You can check out Falastin at http://www.paccusa.org/past-issues.html.