Intisar shut down her laptop, picked up her jacket and tucked a stray wisp of curly brown hair into her scarf. Picking up her bag, she walked to the door of her office and shut the light as she left.

“Leaving for the day, boss?” said a young writer Intisar recognized as Julia.

“Yes, Julia. When are you heading home?”

“Oh, not for a while. You assigned me that that story about the Richardson house, remember? Deadline’s next week.”

“Pretty good, actually. I just wanted to edit it a little more.”

A chorus of more “Good nights” and “See you tomorrows!” followed her to her car. Intisar smiled as she walked across the small parking lot in front of the building. She loved her job.

She approached her car – an electric blue Mustang. It stood out so much that she didn’t even notice the small black one parked beside it. As she reached to pull open her car door, she heard a soft sniffle. She looked up instinctively.

One of the older writers, Renee Thomas, stood by a small, black Nissan Altima, sobbing silently. Intisar hurried over, unable to leave her friend in such a state.

Renee looked up at Intisar, her tear streaked face coming into the light. She said only three words.

Intisar reached out and held Renee, hearing sobs wreak her body, the silence and darkness of the night engulfing them completely.

The words spoken by Renee brought back memories for Intisar. She was trying her best to push them to the back of the mind. Driving along the crowded streets of Maytown, Intisar looked at the rush of people walking under the neon streetlights, trying to distract herself.

All kinds of people walked these streets. A young man flipping his dark hair out of his eyes. A little old lady wobbling along with a smile. A middle-aged man holding hands with a cheerful young girl. Intisar’s eyes stopped. And as the man she assumed was the little girl’s father laughed with her, Intisar’s mind went back to another time.

A blanket of silence hung over the field. A little girl stood by her mother, the green grass and blue sky sharply contrasting with the way she felt inside. A silent tear slid down her slightly pink cheek. She watched quietly as her father’s body was lowered into the ground…

“BEEP!” Intisar shook her head, turning her attention back to the road. She took left and slowed slightly as a squirrel ran across the street to safety. Intisar’s stomach grumbled. Her mind, however, overflowed with the incessant flood of memory.

11-year-old Intisar lay on her bed. Sleep was not coming to her, no matter how hard she tried. Her pillow was stained with dark, wet spots from the tears that had flowed so easily from her eyes. Now, her eyes were dry – there were no more tears left inside her. She hadn’t eaten anything but a cheese sandwich and some water for three days. No one had really cooked dinner. Her mother, she hadn’t been the same since. Since the accident.

Intisar took a right turn into her driveway, putting her car into park before sliding the keys out of the ignition. Taking a deep breath, she stepped out of her car, locking it on her way into the house.

The door opened before she even got out her keys. Two small pairs of eyes peeked around the door before she opened it completely. Two identical faces, with two excited identical, mischievous smiles on them cooled her eyes. Seeing her sons, Intisar couldn’t help but smile too. They were adorable, Masha’Allah. She couldn’t ever thank Allah enough for them.

“Can I carry your bag, Ammu?” said a still-smiling Musa.

“No, I want it! Don’t give it to him Mommy. He always gets to help you!” retorted an exasperated Haroon.

Not wanting to cause another argument between them, she kept her bag with her and took off her shoes, a smile still lingering on her calm face. Hearing footsteps, she looked up at her husband, her smile widening.

“Assalamu alaykum! How was your day?”

“That’s good news. You want to have dinner now?”

“Awesome. Let me take that for you,” Siraaj said.

He took her bags and files and gave her a quick kiss on the cheek. Placing her things on the table, he rounded up the twins to go wash their hands…

Intisar looked up from her textbook. She wasn’t really reading it anyway. She didn’t really feel like doing anything anymore. She heard a sudden “thump” come from her mother’s room, but she knew better than to go in there when her mother was angry. And she hadn’t stepped in there once since her funeral. Another crash. Sniffling and soft crying soon followed. “Maybe I should go…she sounds really upset,” she thought to herself. After all, she was her mom. Her footsteps echoed in the empty hallway as she made her way to her mother’s bedroom…

“You splashed me first!”

“Okay, you guys both have made my shirt completely wet! I’m gonna get you now!”

“No Abu!” the twins said together. Laughter echoed from the bathroom into the hallway.

Her father picked her up and threw her into the air, and then caught her again. They laughed. They always had so much fun together. Intisar sat on the swing, bracing herself. And with a sudden push, she was flying up, and falling back down again. Her scarf fluttered in the breeze and her father laughed at her excitement. Soon, it would be time for the picnic…

Siraaj walked in carrying Haroon and holding Musa’s hand. Musa suddenly let go of his father’s hand and broke out running into the living room. Intisar caught him, the smile returned to her face.

“Careful, Musa! Don’t go near the bookcase!” The twins had bumped their heads on there too many times already.

“Careful Intisar,” came her father’s distant voice. “You shouldn’t run in the street.” But Intisar didn’t hear him, didn’t see the car coming. All she saw was her mother waving at her from across the street, the signal that the food was ready. She had looked forward to this picnic all day…

“Musa!” She said, as a small thump interrupted her thoughts.

Suddenly, she was surrounded my blinding light. She heard her name being shouted, in a voice that could only be her father’s. And she was pushed out of the way, just in time. She was relieved, until she heard the crash, followed by her mother’s piercing scream…

“Mommy, why you crying?”

Intisar looked at her son, whose brown eyes were filled with concern. She couldn’t help but smile. She blinked, and the tears she didn’t know had gathered fell over the rim. She wiped them quickly, and gave Musa a hug.

In a dinner full of laughter, Intisar temporarily forgot about the thoughts that had been absorbing her mind since the meet with Renee. She laughed along with them, and after dinner, they had a lot of fun playing catch in the living room.

But later, after the fun had been had and the kids had been put to sleep, they came back. The house was quiet. Everyone was asleep, but the thoughts in her head rang louder than the toll of a thousand clanging bells.

The walk to her mother’s room wasn’t long, but to Intisar felt as if it took a thousand years. As she opened the door, she saw immediately how messy the room was. Clothes were strewn all about, and the desk was overturned. On one wall, there were two dents; and on the floor below a broken lamp and a vase, shattered. The source of the crashes. She looked around for her mom, and saw her lying on the bed. Before she could take another step, her mother screamed.

“You! Don’t you dare come near me! It’s your fault! It’s all your fault! He’s gone because of you!”

Intisar stared at the ceiling, tears streaming down. She didn’t even try to stop them. It had been so long since this memory came out of the shadows. So many times she had thought about this, so many times she had wondered if her mother was right. But, after that day, she promised herself one thing. She promised herself that no matter what happened, she wouldn’t let herself go like her mother had. She would stand through it all. She would be patient. She would accept it and go on with life. Thirteen years ago, that was the promise she had made. But what now?

“Ammu?” a small voice said from the darkness. Musa had entered her room, his face swept in fear.

“I had a bad dream, Ammu. Can I sleep with you tonight?” he asked, his lower lip trembling.

She set aside her comforters for her son and nestled next to his trembling little body. As she stroked his soft check, she realized patience was really the key.

That was why she had been successful all these years. She had kept that promise throughout high school, where she had to do everything by herself, and college, which she worked hard enough to get a scholarship for. And when she found Islam, her life had been enlightened.

That was how she had gotten from there to here.

She held her son in her eyes, realizing that indeed, with every hardship comes ease. And now, at the end of her hardship, she had finally found ease. She had a wonderful family, an amazing job, and a Deen that she loved more than anything else. She was complete.

Now, it was her turn to whisk away the nightmares of her children by letting go of her own. The present was waiting. She slid into her covers and closed her eyes. And to the haunting past, she whispered. “Goodnight.”

Sumaiyah is currently a student at the University of Houston. She joined MYM to exercise her writing skills and broaden her horizons, and she really enjoys working with her fellow writers. She loves to laugh and spend time with friends and family. She hopes to one day work in a higher education institution like a college or university, and help students reach their full potential. 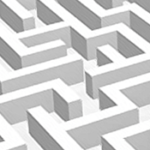 Labyrinth of the Lovestruck 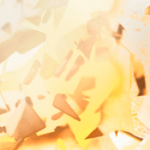 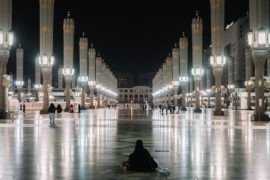 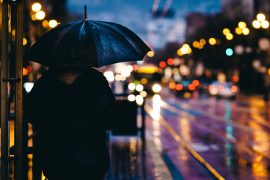