Muslim Youth Musings presents artwork and reflections by Aima Warriach, a first-year politics student at Ryerson University in Toronto, Canada. Together, with MYM Staff Writer Mariam Vakani, they reflect on the struggles they and many Muslim women face when they don the niqab (face veil), their vision to reclaim their identity, and their message to those that call them oppressed. Find out more about Aima’s work on her YouTube channel, Niqabae Chronicles.

It’s awesome that we have Muslim women representing, but is that enough?

No, I’m not hating on other peoples’ success stories actually just wondering does their success represent my story. Obviously it doesn’t because most of these Muslimahs in the mainstream media either wear hijab (or don’t) and to top it all off, they’re incredibly fashionable. #workitgurl #FemaleEmpowerment #MuslimGirlMagic

Where does that leave a niqab-observing, anime/manga loving, Korean enthusiast like me? I’m just your average nerd.

I did some deep internet research to find other Muslims like me, but what I found were people hating on shariah, hijabis teaching niqab tutorials, and people all around using the niqab as a fetish or a temporary fashion statement, so that they can come across as liberated when they take it off in their music videos or magazine covers.

I wear niqab as an act of defiance against the patriarchy that keeps telling me what to wear because somehow they know what it means to be liberated from “Taliban-like oppression”. It’s just a group of people from the west telling me that my hijab and niqab aren’t welcome and then I have people in the east telling me that my T-shirt and pants aren’t welcome. Men in high places policing a woman’s body and dictating to her the choices she can make to revolutionize her closet.

Because at the end of the day, being a Muslim, woman of color, Canadian immigrant, and a feminist, it doesn’t matter how or whether I choose to cover. My body will be policed and my choices scrutinized. That’s my reality! My body is sexualized to the point that it’s used as a prop to sell cars but is seen as abnormal for breast-feeding.  My body bombs heavily populated areas and it triggers radical feminists. My skin color is under the microscope as I’m told to use Jolen Bleach to make myself lighter. But being my non-conforming self, I decided to take the highway.

Dalia Mogahed said it best when she asked, “What does it say when we call Muslim women oppressed?” Oppression means to take away one’s power, but hijab is used to privatize our sexuality. Essentially, the haters are saying that if we do not make our sexuality public, that we are being oppressed. In other words, are women only powerful when they show their sexuality? And yes, a minority of Muslim women are forced to wear the niqab, so I will not sit here and act like it’s not an issue. However, the issue does not stem from Islam, but from patriarchal culture.

So having being bombarded of images of niqab being worn by terrorists, of sunken eyes and worn out souls, I took it upon myself to change that narrative. I can’t wait for some Niqabi like me that might exist to start the conversation. The same goes for you: don’t wait for someone to tell you it’s your time to shine! Take control and let yourself be the narrator.

A Symphony of Choice

To the women who tell us we are oppressed,

Do you realize that there is no voice that drowns us as much as yours? When you rally for the freedom of our sex, do you realize that you speak above us, assume that our veiled heads and faces discredits our voices, make us mute? When you explain to us that our veils are oppression, without ever hearing how we chose to put them on, you are not liberating us. When you tell us that our fathers, brothers, husbands and sons are oppressors, you are not asking for the stories of how we showed them what freedom looked like.

You are discrediting our intelligence, ladies, when you tell us that we do not know what is best for us. When the feminism you fight for is an Anglo-centric conceptualization of freedom, you become no better than tyrants. When you forget that freedom is the right to choose and demand that we change what we are to be just like you, you are no longer feminist. You are no longer hoping to empower anyone except yourself.

You look at us and assume that we have no choices. We are a symphony of choice. We choose, every morning, to challenge ourselves to live in a world that disagrees with the way we choose to dress! We choose to challenge a world to look at us for more than our bodies. And so you see, you and us, we are not so different. We stand, shoulder to shoulder, sister to sister, in the belief that we are accountable to no man.

Ladies, when you try to raise your voice above ours, you forget that we are freedom fighters, too. We believe in the freedom to choose. And we choose this.

Mariam is seventeen, currently in her second year of battling her way to a BA in English Literature and Philosophy at Ryerson University in Toronto. When not struggling to make sense of poetry or philosophy and drinking coffee, she can be found blogging, reading, wishing she had a cat or tweeting incessantly about boring things. She's joined MYM to get a chance to express herself whilst learning from other great writers, and hopes to find her place as a writer for the Muslim community so that she can fulfill her dream of making a dent in Muslim literature. 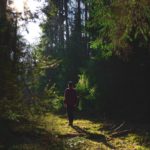 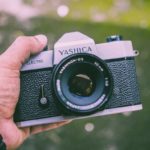 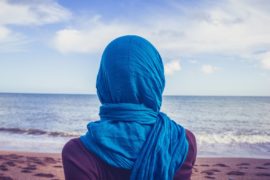 To A Mere Headscarf 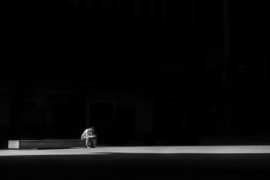